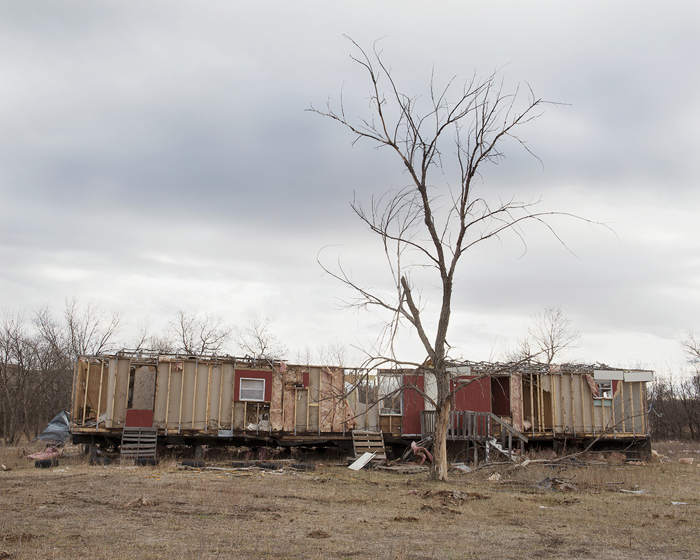 For nearly 25 years, John Willis has visited and worked on the Pine Ridge Reservation in South Dakota, home of the Oglala Lakota Sioux Tribe. Recently he has also spent time on the Navajo Nation in Arizona. The non-traditional, sub-standard housing he has encountered on these Native American reservations comprises the subject matter for many of the photographs in the BMAC exhibit.

“A few years ago, the federal government reclaimed the trailers made to assist Katrina victims, deeming them too poisonous for habitation. The Federal Emergency Management Agency then decided to ‘generously’ donate them to Native American communities for the cost of transportation. Upon learning that my friends were thrilled to be purchasing new homes for $3,000, structures that had been deemed uninhabitable, I was embarrassed by my government’s disregard for its people,” Willis said.

“When I discuss this situation with non-Native Americans, their responses often reveal the misconception that indigenous tribes live a life of luxury, because of the stories they hear about a few tribes with highly successful casinos. Most Americans have no idea that the majority of reservation communities are among the poorest in our country, and that their inhabitants are living in third-world conditions.”

John Willis received his M.F.A. in photography from the Rhode Island School of Design in 1986. He has taught photography at Marlboro College since 1991. He is a co-founder of Brattleboro’s In-Sight Photography Project and Exposures, a cross-cultural exchange program that establishes the arts as a common language among youth from diverse communities. In 2011 Willis was awarded a Guggenheim Fellowship for having demonstrated exceptional creative ability in the arts.