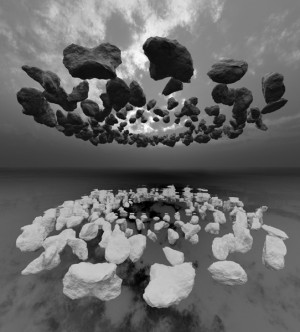 John Douglas studied a little art and architecture briefly at Harvard, served in the U.S. Army, and moved to Vermont in the early 1960s. He worked as a documentary filmmaker both independently and with the Newsreel media collective. After 10 years in New York City, he came back to Vermont in the mid-1980s and began to work exclusively in computer graphic imaging (CGI): 3D modeling, animation and digital prints.

His critically regarded and academically respected film work of the 1960s pursued the political conflicts of the era, reaching from Civil Rights in Mississippi to the War in North Vietnam. His early 1970s prize-winning epic narrative Milestones, a collaboration with the late Robert Kramer, examined what had become of the hopes, dreams and passion of the American counterculture.

Today, after his “Homeland Security Collection”, Douglas still seeks political and social change, though his art is primarily of virtual landscapes. The beauty of our planet shows him the eternal possibilities of hope and evolution coexisting with the potential destruction of human life. Rocks, stones and boulders communicate inertial energies and suggest an alternative planetary intelligence. Douglas contemplates that their wisdom might well be staggering to fully comprehend. What do stones think? What do trees see? What does water truly reflect?

Vermont’s first inhabitants walked through its forests and along its riverbeds. Man passes through time in his self-important reveries, while the rocks, trees and waters endure in their own timeless rhythms and rhymes. At best, Douglas states, we can grasp glimpses of their world as we pass.