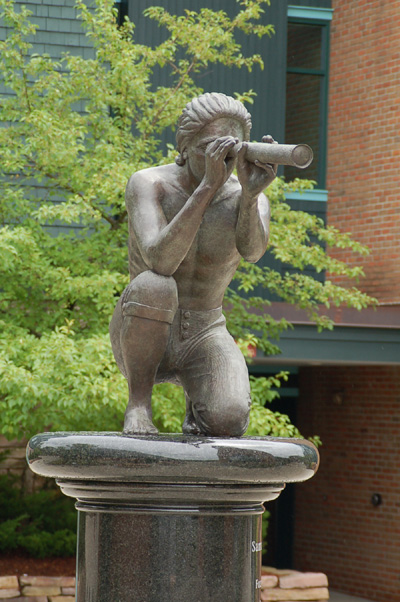 Perhaps best know for Reverence, the two whales tails off of Interstate 89 in South Burlington, artist Jim Sardonis provides another addition to local public sculpture with his interpretation of Samuel de Champlain in bronze.  The piece commemorates the 400th anniversary of the French explorer’s arrival in the Lake Champlain region. He founded Quebec City in 1608 and became the namesake for Burlington’s much loved lake.  The bronze figure was commissioned in Summer 2009 by Champlain College Trustee Emeritus John W. Heisse, Jr. M.D. and unveiled as a part of the Lake Champlain Quadricentennial celebration.  It now stands in the Rozendaal Courtyard on the campus of Champlain College. Sardonis’ sculpture avoids the overly formal tendencies of public statues, in favor of a more casual depiction of the man to whom Burlington and surrounding cities owe so much of their history. Champlain surveys the water through a telescope, bare-chested and kneeling westward toward the lake atop his granite pedestal.