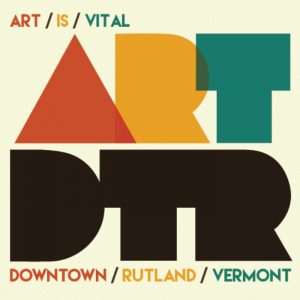 Art is Vital is an umbrella entity, directed by Bill Ramage with the assistance of Bianca Zanella, that oversees all the moving parts of six galleries in Downtown Rutland and their associated programs: concerts, workshops, artist talks, an in-development artist work space and an artist residency. 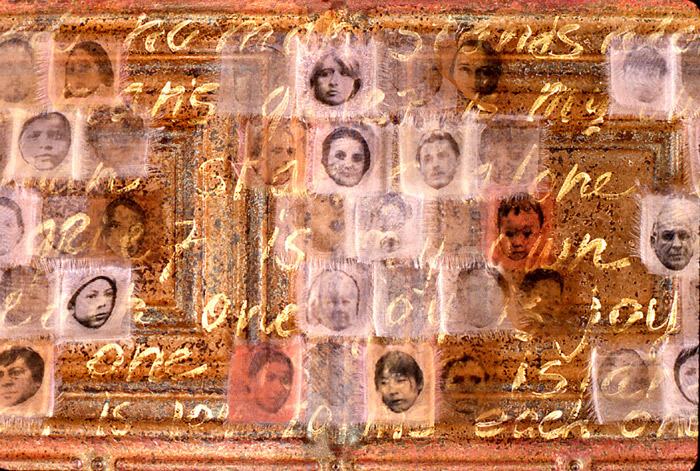 April 6-May 17, 2019 at the 77 Gallery. Curator Bill Ramage presents over 300 works of art by sixty-seven artists who are seventy years or older. For those who came of age between 1949 and 1970, writes Ramage, “it was a gerotrancendent realization that the most significant thing we brought to the table of a transforming culture was the gift of empathy. In spite of all the insane trials and disastrous tribulations of those twenty-five years, our one true and lasting legacy are the many rewards of the new and inclusive lexicon of cultural empathy.” (image above by B. Amore)

77 Gallery:This downtown gallery is part of a concerted effort to revitalize central western Vermont through the arts. “77Art hopes that by bringing artists together for a concentrated time in a new and emerging place, we can facilitate the flow of exhibitions and cultural production with far reaching implications.” 77 Grove Street, Rutland 05701 | (603) 732-8606 | Hours: Monday-Friday, 8AM-5PM | MAP | WEBSITE | FACEBOOK 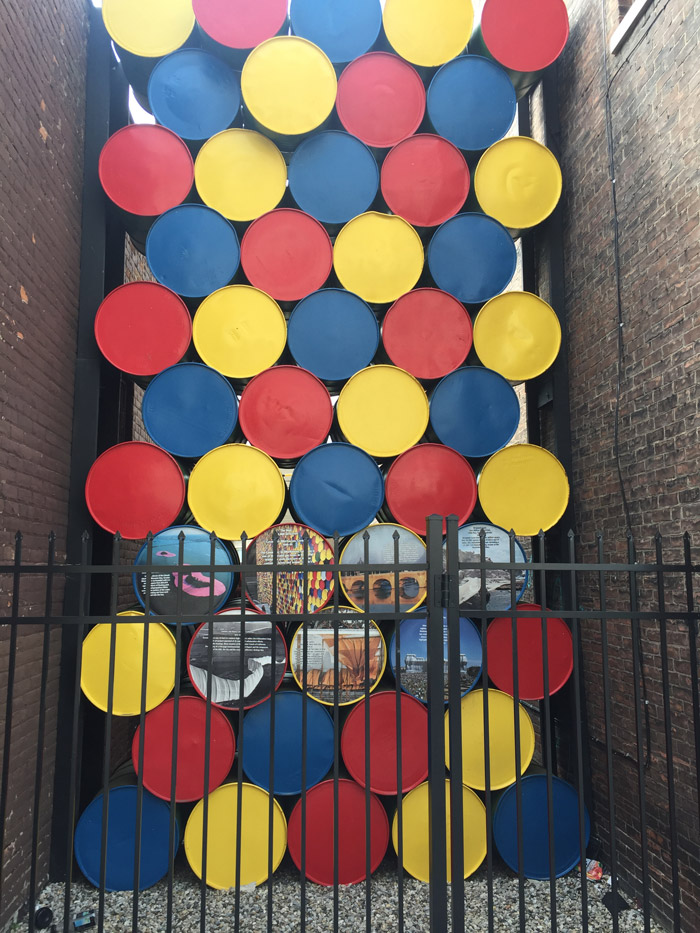 A Tribute to the Brilliance of Christo & Jeanne-Claude

Bill Ramage’s installation pays homage to Christo & Jeanne-Claude’s 1962 temporary installation Wall of Oil Barrels-The Iron Curtain in Paris, a barricade of 89 oil barrels erected on one of the Left Bank’s narrowest streets to protest the Berlin Wall, which had gone up in August 1961. 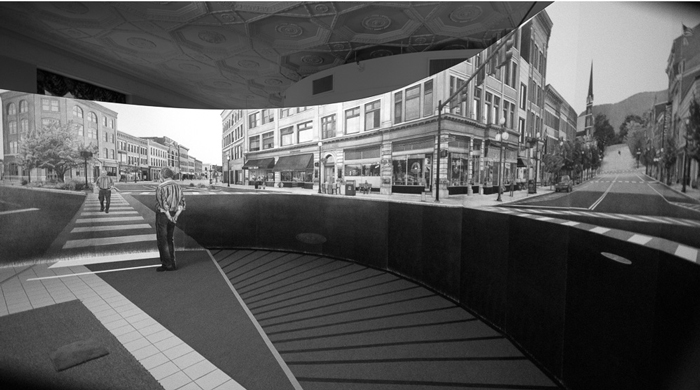 The Opera House Gallery: Adjacent to the RUVT Gallery, in the space that was Clay’s, the gallery shows work by Rutland-area artists.59 Merchants Row, Rutland 05701 | Hours: Friday, Noon-5PM | MAP | FACEBOOK 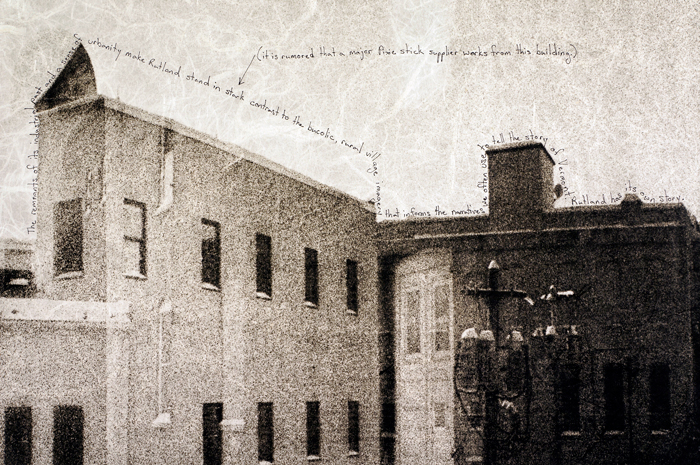 Opening reception: Saturday, February 9, 6-8PM
January 31-March 9, 2019 at The Alley Gallery. Curator Stephen Schaub invited eight internationally-recognized artists, all of whom work with the photographic image, to investigate Rutland’s geography, history, and people to create artwork that tells a story about Rutland. “I asked each of the artists in this show to explore the city of Rutland as an idea, a place, or a history, and tell a story from that foundation,” said Schaub. “Real, imagined or someplace in the middle–as long as the narrative anchors itself in Rutland, everything is fair game.” (image above by Stephen Schaub; image below: from the “Junk Series” by Don Ross) 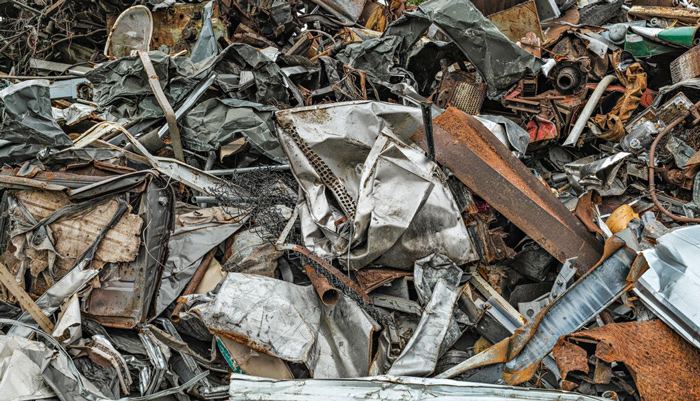 October 4-November 17, 2018 at the Alley Gallery. “Figuration” is an exhibition of mostly of unframed quick process figure drawings by Bonnie Baird, Jerry Ralya, and Kate Gridley. These three artists believe that, “Painting and drawing people is an intense experience, sort of like speaking a language without words, seeking a truth. We stand in humble awe of the faces and bodies of our fellow humans, with all of our asymmetries, ‘flaws’, and beauty.” (Image by Bonnie Baird) 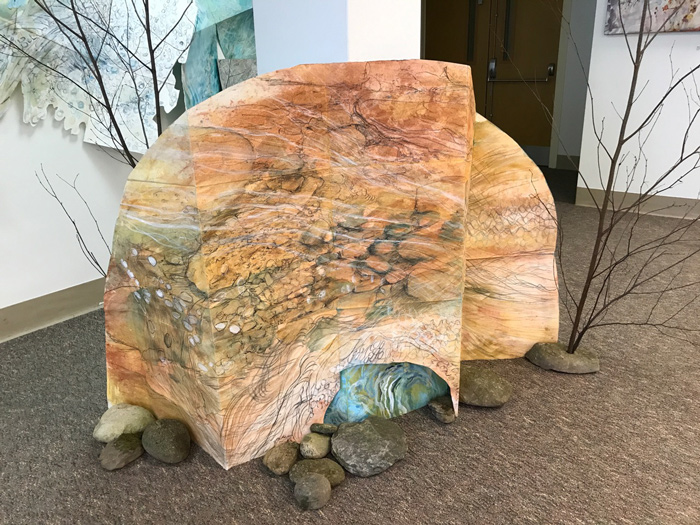