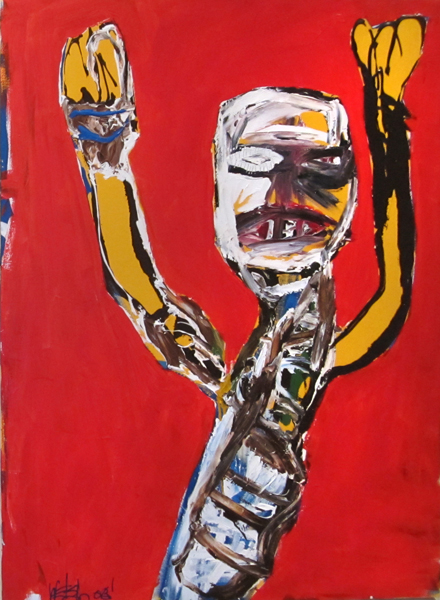 Mikey Welsh is a self-taught representational and abstract painter based in Burlington.  His work reflects the strong influence of Jean-Michel Basquiat along with Joan Mitchell, late Willem DeKooning and Jackson Pollock.  What is most exciting is Welsh’s assimilation of these styles, and the emergence of his own.  His background as a musician (Welsh was the bassist for the superband Weezer for five years), and his untrained approach to painting have created in him a freedom with paint, mark-making and scale.

He gives himself permission to defy convention while influenced by these past masters.  The result is an exuberant collection of work through which we can see Mikey’s soul.  Through this window he is at times beset by demons, emotionally fractured, manic, meditative, and joyous.  Though all of these states are present, never is there any sign of retreat.  Mikey is a survivor and an achiever.  The practice of painting, and creating art in the isolation of his studio may be Welsh’s wilderness, but the products of his wandering and his hands are glorious, uninhibited shouts to the world… “I am HERE!” 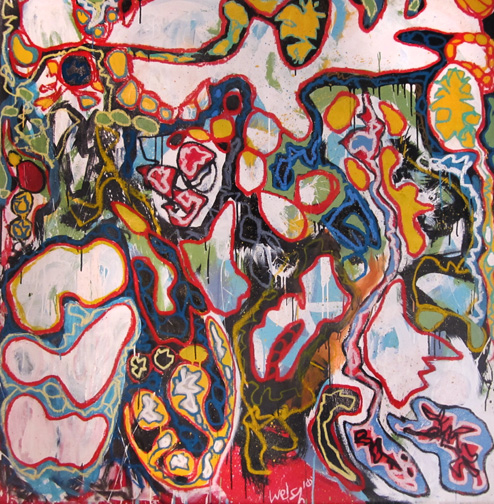 If he makes his artwork in this wilderness, do we hear it?  We do.  Welsh exists fully integrated in the modern realm of social media and in the established world of real people.  He has built a strong network of creative peers in Vermont, and combines this with “the cloud” of interested fans through Facebook, Outsiderart.com and others.  These connections are a cure for the isolation of the studio, and are analogous to his studio practice as a musician, where he had the constant feedback and collaboration of his peers.

Distorted faces and figures leap from the canvas.  A semi-self portrait on a bright red field holds up its hands in mock surrender.  Layers on layers on layers of flowers build up on two panels, increasing the complexity of the image and become an engulfing screen. A chaos of color, strokes and swipes reveals itself to be many layers of broad strokes partially masking those before, the holes in the last layer yielding exciting depth and a sophisticated palette.  These are Welsh’s paintings – simultaneously assaulting the viewer, reflecting the viewer and -in time- embracing you.

I’m convinced that Mikey’s works are both for himself and gifts to the world.  He seems un-conflicted about selling work, and intentionally creates some artwork that is smaller and thus less expensive, catering to a broad audience of fans and collectors – “Look, there is something here for everyone”.  He understands that the work is not complete until it has been consumed and appreciated by others.  While he doesn’t make work based on what he thinks will sell, he is clearly inspired and fueled by the response of the public.

Welsh has shown broadly since immersing himself in painting in 2001.  His first major exhibition was, appropriately, at Paradise Rock Club in Boston, MA.  He has shown at Montanaro Gallery in Newport, RI; BRIK Gallery in Catskill, NY; and The Amy E. Tarrant Gallery at the Flynn Center in Burlington, Vermont.  –Nathan Suter, Executive Director, Helen Day Art Center