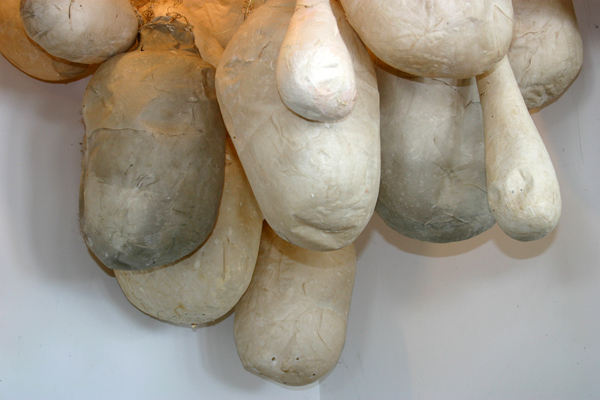 Riki Moss’ work attempts to establish a dialogue with the natural world in her on-going installation called The Paper Forest. The collection of sculptures ranges from flora and fauna to masks and flying bunnies. Her work is reminiscent of a mythological view on themes such as evolution, birth, and emotion. She works with over-beaten abaca pulp that is pressed over forms and finally assembled.

The translucent paper Cocoons are formed over models and evoke the former or future homes of mysterious creatures. Hung on filament in series, they sway gently as people pass by, as if moved by lingering spirits. Spilled on the floor, they feel like empty vessels, or amphora.

Working from a foundation in pottery and encaustic paint, Riki Moss has been creating sculptures from her studio in Grand Isle, Vermont for the past five years. During 2010, the installation was part of an exhibition held in conjunction with the United Nations Conference on Biodiversity called “On The Planet” as well as shown in two museums for the Holland Paper Biennial. She is co-founder of Studio-Glow.