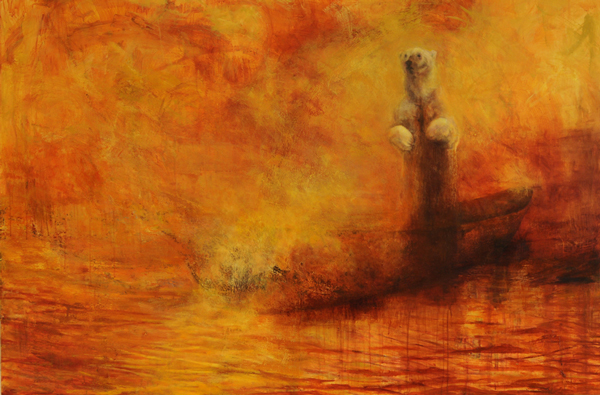 “The polar bear may be just the canary in the coal mine.  If we can save the polar bears, we will ultimately save ourselves.”

A strong foundation in drawing enables Sally to move seamlessly between representation and abstraction determined by her subject’s desire to be recognized or left to imagination. Inspired by Earth’s beauty and the social and political issues that confront humankind, each of Linder’s artistic endeavors has sprung from a deep commitment to Earth and all living beings. Her paintings chronicle a quest for a better and more conscience-driven world and her passion becomes the purpose and content of her work. Painting in series provides the opportunity to be immersed in each subject’s distinct, emotive language conveyed by choice of color, form, and mark. Series that are aroused by political, social, or environmental issues are often gifted back in unique ways.

Sentient Being is a seminal work from her newest series of paintings, “Bear Love.” She writes, “Many of the legends of the polar north, as told by the Inuit elders, speak of the spirits of the great white bear and man – as being interchangeable. When the polar bears enter their dens they shed their hides and become men, and only upon returning to the frigid outdoors do they don their furs once again.”

Linder has exhibited worldwide in Bangalore, India; Amsterdam, The Netherlands; Jakarta, Indonesia; throughout the United States; Yaounde, Cameroon; and Johannesburg, South Africa. She is the recipient of national and international awards from the International Music and Art Foundation in Liechtenstein, the National Endowment for the Arts/Vermont Arts Council, the Philanthropic Collaborative in New York, amongo others. She is also the recipient of the Board of Governors’ Medal from Concordia University in Montreal. Her work has appeared in Orion Magazine, Yes!, the National Geographic Magazine, Art New England, The Best of Acrylic Painting, and Femina Magazine. Speaking engagements have included the United Nations, the Earth Charter’s venues at the World Summit on Sustainable Development in South Africa, Brown University, the International Women’s Conference in Bangalore, India, Middlebury College, and the Cathedral of St. John the Divine in New York City.