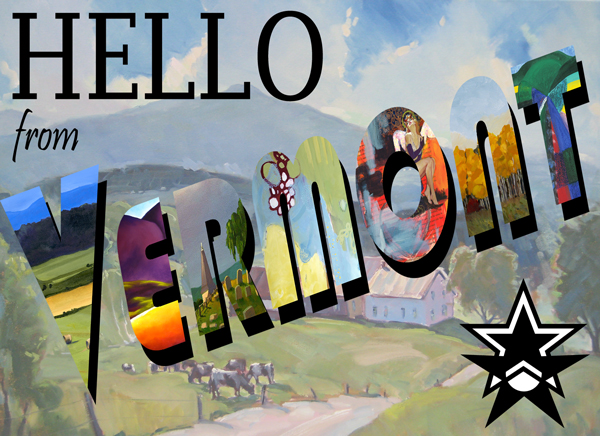 Cummings is an an eco-Artist using recycled and repurposed materials. “Vermont Wastescapes” are photograph-based collages assembled from trash collected in each of Vermont’s fourteen counties. She teaches art in Vermont.PREVIEW ARTWORK

Larkin’s paintings in oil and pastels capture landscapes in and around the Lake Champlain Islands and Northern Vermont. A studio artist for over 25 years, Larking paints full-time at her home on Isle La Motte. PREVIEW ARTWORK

McGlynn’s “Test Pattern” series of paintings conflate the symbolic template of the mechanical eye’s calibration of colour with spontaneous colour field interaction, suggesting a newer use for painting. McGlynn is an artist, writer and educator based in the New York City area and in Vermont. PREVIEW ARTWORK

Dworsky’s work investigates the ways that human beings interact with the landscape.  It includes sculptures of crocheted rope, intaglio prints, graphite and charcoal drawings and large-scale public installations. She is based in Montpelier. PREVIEW ARTWORK

Patlove’s stretched, painted canvases blur the line between two and three dimensional artworks and respond to subtle environmental shifts, as well as changes in the viewer’s physical orientation to the work. Patlove has lived in Vermont since 1995. PREVIEW ARTWORK

Rigby’s recent work focuses on painting on paper, beckoning the viewer in from the distance, insisting on an intimate interaction. Born in Los Angeles, Rigby grew up in Vermont, where she lives and keeps bees. PREVIEW ARTWORK

Moving between representation and abstraction, Linder’s paintings confront the social and political issues of the day. Linder was educated in the United States and Montreal and has lived in Vermont since 1979. PREVIEW ARTWORK

Using a range of paintbrushes and homemade rubber tools, Nancy H. Taplin paints on linen and paper with dramatic brushstrokes. Taplin, who lives in Warren, has been showing her work in New England since 1980. PREVIEW ARTWORK

Longmaid explores individual identity and what is revealed in the intimate moments of seeing and being seen. Longmaid has been living in Shelburne since 1994 and shows her work throughout the region. PREVIEW ARTWORK

The forms in Vogler’s paintings range from geometric to amorphous, serving as repositories of colour. He works largely in oil and wax, drawing on his personal experience and surroundings for inspiration in his work. He lives in Charlotte. PREVIEW ARTWORK

Fiber artist Eve Jacobs-Carnahan dyes and spins her own yarn to maintain complete control over her palette. Her sculptures are inspired by traveling, gardening and human interactions with nature and community. She lives and works in Montpelier. PREVIEW ARTWORK

Jones’ dense, almost three-dimensional style incorporates encaustic and oil paint laid on paper, canvas or wood panels. Jones has been a practicing artist for over 35 years and lives in Burlington. PREVIEW ARTWORK

Brickels’ mechanical sculptures, which sometimes include vintage metal parts, refer to the industrial culture of his childhood home, Akron, Ohio. He has been creating these ceramic sculptures for over 40 years. His studio is at S.P.A.C.E. in Burlington’s South End Arts District. PREVIEW ARTWORK

Moss works with over-beaten abaca pulp that is pressed over forms and assembled to create works that establish a dialogue with the natural world. She has been creating sculptures in her Grand Isle studio for the past five years. PREVIEW ARTWORK

Rupe’s “Urban Habitat” paintings show a variety of animals, including bears, gorillas, lions, rhinos, narwhals and warthogs passing through the “urban jungle”. Rupe lives in Burlington and has taught in private and public programs throughout the United States and in Italy. PREVIEW ARTWORK

Janet Van Fleet is a mixed-media artist, creating her pieces primarily out of natural and man-made materials and often referencing political, environmental, and social issues. Van Fleet works at her studio at Studio Place Arts in Barre, a community art centre that she helped found. PREVIEW ARTWORK

A steel sculptor and painter, Mother-Son Idyll is an example of O’Neill’s found object sculpture.  All homonymic puns are intended: The goat is like a Biblical idol and the gloves have finished their work lives–they’re idle. He lives in Westfield and works seasonally as an assistant at Cold Hollow Iron Works.PREVIEW ARTWORK

Alex Costantino creates artwork in ceramics, paint, pencil, print, and video. His work is always at the service of a vision or idea. Costantino lives and works in the Burlington area as an artist and art teacher. PREVIEW ARTWORK