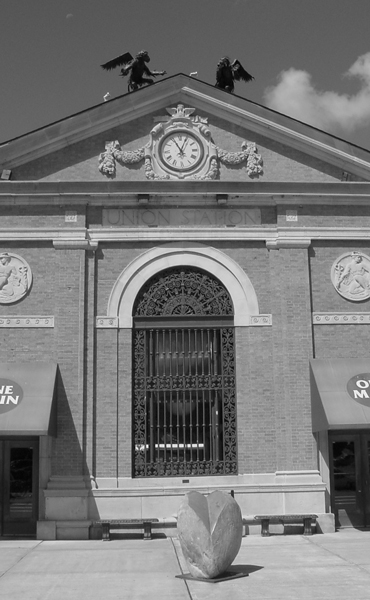 Since the early 1980’s, Melinda Moulton and Lisa Steele have pioneered environmental and socially responsible redevelopment. Their company, Main Street Landing, has been incrementally developing Burlington’s Waterfront, an endeavor that encompasses four buildings in one of the most important locales in the city, including outdoor installations, as well as artist studios. the Art’s Alive Gallery and the Wing Gallery (curated by Art’s Alive).

Union Station
Union Station at One Main Street has three floors of art. Just outside the Main Street entrance to Union Station, you can see Christopher Curtis’ sculpture Venus and, looking up, Steve Larrabee’s Winged Monkeys. The floor off the Main Street entrance is the home of Katharine Montstream’s studio, as well as the Art’s Alive Gallery. Each month, Art’s Alive presents the work of Vermont artists. The train level floor includes part of the Art’s Alive Gallery, as well as Lars-Erik Fisk’s Train Ball and a mural of Waterfront images by Nancy Barnett of Fresco Studio. On display on the third floor (use elevator to access) are ten photographs from Peter Miller’s “Vermont Farm Women” series.

Wing Building
Don’t let the fact that the Wing Gallery is the building’s hallway put you off. Wing Gallery is an excellent example of adapted space, something artists in Vermont are remarkably good at. A long corridor curated by Art’s Alive, the space is well-lit with directional overhead lighting.

The CornerStone Building is open Monday-Friday during regular business hours.

Lake & College Building
Each of the three floors of Lake & College has art for your enjoyment. Main Street Landing commissioned two murals by local airbrush artist Ron Hernandez. On the First Floor (turning right after you enter) is Hernandez’s 2008 Endangered Species mural. His other mural, Pan of the Seasons, Lake Champlain, is on the third floor in the Lake Lobby. A unique historical display is worth a trip to the second floor corridor at the south end of Lake & College. Richard Moulton presents 59 reproductions of photographs and artwork detailing the history of Burlington’s Waterfront, from the time of Champlain to now. Other Vermont artists whose work is on display at Lake & College include Katharine Monstream, Livy Hitchcock, Annelein Beukenkamp, Alistair McCallum, Caleb Clark and Ginny O’Reilly.

In the office of Main Street Landing at Union Station hangs a watercolor of two red shoes by E. Bunsen.  Moulton explains why Steele purchased the painting. “When we owned the Pease Grain Tower, I used to go in with my red high heels and shoot rats with water pistols to get the rats out of the way so I could check the building. The red shoes represented something to her. A lot of the art that’s in the building is something that represents something to one of us.” Take a tour of these buildings and one may find a piece of art that means something to you too.